Introducing mimo v2, a brand new protocol that will fuel the next wave of decentralized finance (DeFi) on IoTeX. Developed by CapitalMu, a group of fintech experts from the National University of Singapore (NUS), mimo’s vision is to empower next-gen DeFi products that utilize our state-of-the-art automated liquidity protocol and the IoTeX platform’s lightning-fast speed, low gas fees, and cross-chain compatibility with top blockchains.

Since launching in September 2020, mimo v1 has processed 100,000+ transactions and currently manages more than 175 Million IOTX ($3.5M) in liquidity across dozens of trading pairs. mimo v2 not only introduces innovative features and enhanced performance, but also employs an entirely new methodology and user experience for community-managed liquidity pools:

mimo v2 delivers flexibility for liquidity providers, who can now create any number of custom XRC20-XRC20 positions, and powerful benefits for traders, such as lower slippage and better pricing thanks to optimized routing. Moreover, mimo v2 is Web3-compatible and developer-friendly – new users can access mimo via MetaMask for seamless onboarding and developers can easily build new DeFi tools/services on top of mimo v2.

Subscribe to our blog and Twitter for updates, and get in touch with us on Telegram (Announcements, Chat) or in the mimo thread on the IoTeX Discord.

Today’s Alpha release of mimo v2 kicks off our ambitious roadmap for 2021. In addition to the decentralized liquidity pools and token swaps you are familiar with from mimo v1, mimo v2 will serve as the foundation for advanced features that will greatly expand DeFi on IoTeX. These features, which are summarized below, will be released incrementally and progress from Alpha → Beta → Production.

In addition to these game-changing features, mimo v2 also introduces a sleek new website/app with enhanced UI/UX to make swapping and providing liquidity more seamless than ever. We have also launched a new analytics portal with both single-token and token-pair views, as well as IOTX and USD views.

This Alpha release of mimo v2 is an experimental DApp with several streams of work still in progress. From formally verifying our smart contracts to optimizing Web3-compatibility to creating better documentation there is much to look forward to. Over the coming months, we will post regular updates on our progress and invite your feedback. We are excited to bring you along in our journey to create the future of DeFi on IoTeX!

How can I help test mimo v2?

We are launching mimo v2 in Alpha to gather feedback – if you want to help test mimo v2, it’s simple! Share any bugs or feedback to us on Telegram.

What will happen to mimo v1? Do I need to port over my liquidity to mimo v2?

How can I stay up-to-date on the latest mimo v2 news?

Subscribe to our blog and Twitter for updates, and get in touch with us on Telegram (Announcements, Chat) or in the mimo thread on the IoTeX Discord.

What tokens are supported on mimo v2?

All tokens that are listed on mimo v1 are also available on v2. Additionally, BNB-bsc, BUSD-bsc have been added to mimo V2. We plan to support many more tokens in the future.

Can I add tokens to mimo v2?

Just like mimo v1, mimo v2 is fully decentralized meaning anyone can add any tokens to it. By simply providing liquidity, token pairs will be available for trading on mimo v2. However, not all tokens will be officially listed as default tokens; in this case, users will need to add them using the token's contract address.

If you are a trader, you can choose whichever version of mimo has a better price (note: mimo v1 + v2 are separate protocols with separate liquidity). There can be arbitrage opportunities between the two as well. If you are liquidity provider, we recommend you consider mimo v2 as your first choice as it will be the official default interface.

In last week's post, Mimo DAO: Governance Bootstrapping and Launch Plan, we covered * How mimo will create its initial liquidity and constitute the DAO by giving early supporters vePICO * Mining of vePICO by multiple chains * Incentives to bring on and list more projects * Launch campaign timeline and PICO token allocations 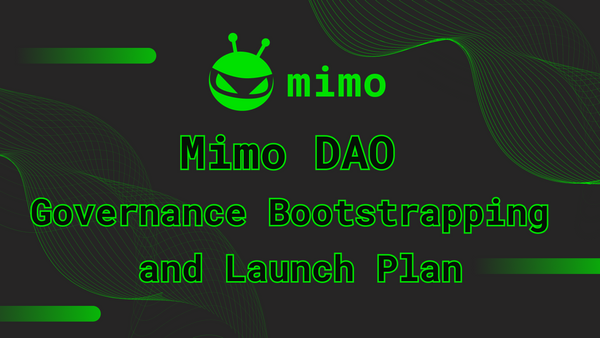 Introduction So far, we have revealed that mimo will be a DAO governed DEX that integrates a vote escrow model. Most of you are curious to know how PICO is allocated and distributed in order to kick start liquidity on mimo. This initial liquidity will power the flywheel effect that 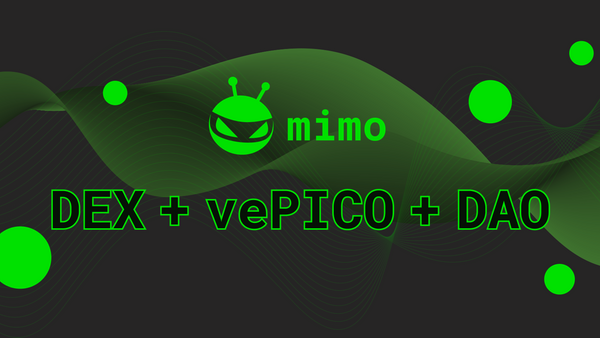 Introduction What's new about mimo tokenomics? We’ve introduced an innovative  DEX protocol  model based on the  veCRV tokenomics model, and governed by a DAO entity. Why is this important? It’s important that the tokenomic model aligns user incentives and optimizes for long-term  performance. This model is premised on